Very much official "Egyptology" is devoid of any comprehension of Spiritism to be able to make a correct translation. Most of it is therefore bogus, misleading, deceptive and simply mistaken. So-called academic experts are regurgitating the same old misinformation repeatedly without ever pausing to study the original intended meaning and to update their knowledge base accordingly. It is a problem. The end result is that the knowledge of the ancients remains hidden. And yet to a shaman or spiritualist, it is very obvious what the symbolism is actually about. Most of what I am teaching about is not what it says on Wikipedia and in published academic texts.

My experience with this stuff as a living practitioner is why I believe I know more about it than stuffy old professors who have zero experience with the Spirituality which the hieroglyphs are created to teach in the first place. This is not their fault, although their refusal to accredit and accept my interpretation as valid is a sign of the dogma holding them back from achieving an holistic synthesis. They are coming at it from the angle that contemporary material science can explain away any foolish mumbo-jumbo the ancients had tricked themselves into believing. That the ancients were more right than we are is not something the 20th century academy likes to face up to. It is an unfortunate situation.

For my part: the information I present within the framework I present it, is what is important. My name will be forgotten eventually. The reality of this form of spiritism as a living culture will perpetuate for as long as there is Life. Our job is to translate and understand what the symbols are teaching us, in doing so we understand why those specific symbols have been used for those specific concepts. It actually makes a lot of sense once you have the key to knowing what is going on.

At first these seem to be contradictory. Their fusion will make more sense as our comprehension progresses to include the South American cultural continuity of the Life Cult.

Neheb Kua is a specific deity. It is associated with a specific concept.

On one plane this relates to the Kundalini energy of a life form.

On another plane - the specific of Neheb Kua - it is a Spirit seeking rebirth.

In Buddhism is the concept of a Tulku, the host body, the vessel, into which a transmigrant soul is reincarnated so that it can experience the world of matter and time. A fetus which develops into a baby which develops into a child, an adult, a body which grows and develops for a duration. Mass in Time as a vessel for an immortal Soul to have a living experience. The process usually involves forgetting the true nature of the self due to compromises made to experience the environment and human culture. Ancient cultures retain some of the long-term awareness and methods for remembering it. This is a primary focal point of the Mystery Schools. These teachings are important enough to have developed into written form as picto-glyphs to survive millennia even when their creators are long forgotten. It is that important a knowledge base.

Neheb Kua has power. Has power to enter into a living person and use that body as host temporarily. To use that mind and those senses, and to make decisions using the faculties of the host. It has the power to change the beliefs, the mind, the actions of a person, to change their life so that they are no longer on that path but instead are on this path. When a soul wants to be reborn into the world, it finds its parents and it does what it has to put them together. Good parents recognize this, welcome Neheb Kua, nurture it and prove they will provide a healthy world for it to grow.

We must, to fully comprehend this in its right perspective, understand that the Human organism can and does frequently become possessed by various spirits and other entities.

Study of Cats reveals this about us. Cats experience it all the time. One of the many reasons Cats are sacred to the Egyptians and worshipped is because they see Spirits, they communicate with and act as hosts for them. It is an everyday part of life for many cats and a strong part of feline culture.

Spirit communication is telepathy. Animals can be telepathic. More often than Humans because they are less likely to be corrupted from primal sensory experience and connectivity with sacred Nature than are Humans. Humans exist in a world of delusion for most of the time.

Neheb Kua is depicted in several ways, usually as a serpent because the serpent is the wave, is motion, is an energetic configuration. Showed with wings it is a spirit. For a clair-audient, it is a tone not unlike tinnitus.  By "going into" the tone we experience it as an oscillation with a peak and trough within which is sufficient variance for communication. Not unlike a vocal chords, it is a resonance. 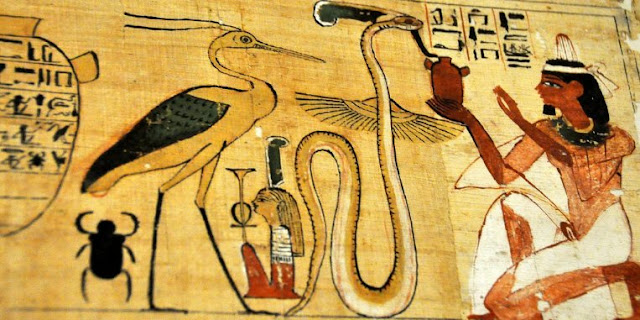 The papyrus shows the symbols for Rebirth (Scarab, 'BenBen' fire-bird / pheonix) and winged serpent. The guy holds a jar, the vessel which can contain spirit, the body of a rebirthed soul. All of the characters are facing the held jar as the central focus, with exception of the composite image which reflects the guy. This image itself requires study. It would be easy to mis-translate that it is the deity 'Maat' simply because academic textbooks state that 'a person with a feather on its head is Maat'. It may be so only if we can choose a specific interpretation of what the word 'Maat' means for it does have many different meanings depending on context. My argument is that other characters also wear feathers on their head (a famous image of a winged woman who is often labelled as "Isis" which is clearly not the same as "Maat").

Why does the feather represent Maat? Well lets forget what we have been told by textbooks that the feather represents Maat. It does not always, in fact usually it doesn't. The inconsistency is not accepted by Egyptology experts because they have no better answer than what they had to say to be awarded a degree in Egyptology from the Academy so they could get a research grant to fund their trip there.

The feather represents Knowledge. The expression "a feather in his cap" relates directly to this. It is a level of achievement, a rites of passage has been passed, a status not so much in society but in the individuals crowning glory of understanding something, an insight. The feather represents Insight. In this sense it is a spiritual insight.

The composite image with the feather on its head has two symbols. One is an Ankh cross while the other is a trumpet shape, a lotus. Specifically, because these two symbols are combined into one, it represents the Ba and Ka aspects of a soul. It is not a full Ankh but the top half of it, the unearthed part of it. Note that it is depicted in black while the trumpet shaped lotus is depicted in gold. This correlates to the Scarab (black) who pushes the Sun (Soul) around the sky so it can be rebirthed, and the Crane (gold) who brings the soul to be rebirthed into the material realm through the body of a mother. Mother / Mater / Maat. Immediately we see that we are dealing with natural cycles.

"When the time is right."

We should analyze the etymological components of Ne-Heb Kua.

Heb means chosen one. Ne means the correct path to the horizon as seen from the apex, specifically it means to be on that path (Ne with an -e). Kua means to go into and make the Ka path. To be within it. A variant on both Ku and Ka.

NEXT: Hunab Kau (yes, Neheb Kua and Hunab Kau are variants, this is no coincidence!)