Ra is the Sun God, the Source, Life.

Re is "emanation of" it might seem ludicrously simply and obvious but it is from where we get the English language word 'Ray' as in 'ray of Light'.

Re is a Goddess. Her temple teach emotional and sexual healing. Her acolytes are counselors adept in skills of kundalini, tantra. They are not prostitutes. The high aspiration is two-fold. One, to heal society by balancing male and female yin and yang. To increase the spirituality of the community by raising the knowledge base. We are sexual organisms, we are designed to use sex to accelerate us spiritually if we receive the necessary education and practice it. Regular study is necessary and for this is required a regular partner. 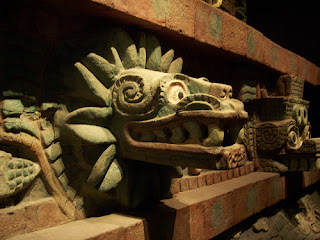 The symbolism of kundalini yoga is very often associated with the 'rainbow feathered serpent' KuKulKaan (QuetzalCoatl) of the Mayan temple which developed as a direct line continuity from the Egyptian temple. This becomes obviously apparent when we accept both schools to be reincarnation schools, dealing with transmigration of the soul. Techniques for recall and accessing past-life skills are through sexual union as it affects cognition processes and perception. Sexual union is a method to take us outside of time by detachment from the material.

It utilizes aware, focused bliss as a catalyst. Male and Female neural systems are designed as balancing polarities. We are not of the "opposite sex" we are "complimentary gender's" created to work together to achieve higher perception awareness.

Re teaches various disciplines involved with attaining that, and at more practical levels on simply harmonizing the community by pacification and pleasurement of as man people as possible of both genders.

Re is symbolized as the winged Goddess. Many Egyptologists mistakenly assume this to be Isis. Isis is the female consort of and Osiris. Together they are the male and female aspects required to channel the Creation energy of Ra through human form, specifically through unified male and female during coitus. Many Egyptologists assume the winged Goddess to be Maat. Maat is Law and we are discussing the most important of all divine cosmic Laws - that the perfect union and balance of male and female can access divinity through shared study of tantric techniques. It is not civic social law. It is not karmic Law. It is more simple and blessedly Pagan than that. It is about Love and the harnessing of love to attain a higher way of being. For the consequences of that attainment we use the proper and accurate terminology. In Egyptian that is 'heka', in English that is 'magick'. If you have no belief in magick as a real factor of our Reality, perhaps because you cannot identify it through lack of experience, you are possibly reading the wrong website.

The goddess is tribal.

“I don’t need a fuck right now because I had one this afternoon but my neighbor and friend she does so I need to send my guy over to fuck her and then everyone is happy because everyone has had a fuck and is functioning better.”

Except for the problem of psychosis.
In a word, Slavery.

Modern society is heavily prejudice against anything which can result in attainment of Enlightenment or empowerment, and has repressed these teachings heavily to the extent of slut-shaming and persecution of liberals, the control-drama that "an affair is ground for divorce" (no love in bitter vengeance).

Inherited contemporary cultural conditioning is that promiscuity is wrong. We are not all being cared for by our tribe as equals. We are encouraged into unforgiving ownership deals. This does not mean that dedicated monogamous marriage or even open marriage cant exist. It means somewhere along the way, loving each other and living as a tribe has been lost and replaced with domination. Loving means ‘acceptance and forgiveness’ much more closely than it means ‘repression and punishment’.

This is something which today has to be taught alongside any knowledge of Re and what her temple is all about. When the Catholic conquistadors discovered twin-temples of Sex and Death in meso-America they dedicated four years to tearing the Life temple down stone by stone. The Spirit temple is still there.

Re is specifically an Egyptian Goddess. Her 'cult' developed into the cult of Bastet, cat worship. Her acolytes were trained at regular temple sessions and sent into the community to bring harmony, using their bodies and the techniques they were taught, instructing their male counterparts. Men and homosexuals of both genders were permitted in the temple although it is easy to believe that staged coups and hedonistic excess led to its downfall and loss of the focal group studying its knowledge base after the transmigration of its founders.

There are high peaks within the histories. The feather worn in illustrations and often taught to be a method to identify Maat because the association of the feather with law are not the whole story.

There are three tiers or ripples to her wings because of the harmonics involved in proximity with Source. The social rings we traverse. It is a functional memetic. That she wears a single feather shows that she is one of a whole wing in flight, a motion. The wings are symbolic of the aetheric, the attainment of specific perception as from kundalini flow through harmoniously toned chakras during intercourse. Ritual is a huge part of the temple of Re indeed the vituals of Re is likely to be from where the word originates.

On another level it means 'one who knows sperm' the feather indicating the life-giving substance which may also be called Re, emanation from Source of Life - dedication to this temple means to ingest it for health benefits, another important part of the teaching in dietary and thus cultural development wherein the educated are preparing nutrients for their "other half's" (plural intended). The point being made here is that it is not what we know as "civic Law" which is associated with Maat in this context - it is natural law which is respected, worshipped, and utilized for the positive prosperity of the citizenry whose cultural focus is that happiness and spirituality is better than division. It is also important to be aware that this co-existed with an official system of slave caste from conquered enemies in which slaves could achieve freedom and equality as citizens. I am using the roman structural of 'civitas' which is easier for a modern reader to comprehend.

Promiscuity and Monogamy are different modules of the temples syllabus, obviously everyone studies everything and practices whatever is most relevant to the needs of community, temple and individual.

Many sources proclaim incorrectly that Re is a variant name of the god Ra. The vowel as -suffix specifies a particular connotation.

Again this is field notes as a basic introduction to a much bigger topic. Specifically of interest for further development is the empathic-counseling, advanced-sexual and prana-bindu (yoga) teachings. I received education into Thanateros from several different mentor's and later through the Order of the Morning Star teachings of High Priest Victa Penfold. The major initiatory phrase is "kundalini yoga" although there is much much more to it than this.

"Called by practitioners "the yoga of awareness", it aims "to cultivate the creative spiritual potential of a human to uphold values, speak truth, and focus on the compassion and consciousness needed to serve and heal others." https://en.wikipedia.org/wiki/Kundalini_yoga

See also: Sat nam although none of the secret teachings from the mystery schools I mentioned are to be found here, these are a core of the syllabus.