Sometime over the past few years, I awoke in a state of anxiety having dreamed of a culture where hastily constructed concrete platforms were erected by the first wave of the Affected. People acting autonomously to simply build the architecture, regardless of who those people were, what planning rules, the effects on society. A blueprint had been imprinted into their minds by harmonic alignment, imprinted by soundwaves, sub-audible, affecting only those relevant to ensuing the project occur as quickly as possibly. Some primal part of the mind had been activated, the rest of us didn't realise what had happened until we ourselves became the next waves of the Affected. Everybody instinctively knew the obvious, natural order. Questioning why we had changed, overnight, into entirely different people with new understandings, a dim awareness that a higher dimensional entity was zapping us with rays, using us as herd animals; was linked integrally with the who-ami-i? self-awareness, how alive is the individual. Easier to do what is natural flowing from the hearts reassurance that doing the right thing is to follow the apparent order. We were like zombies.

There were those, taller than use, dressed in grey-blue robes, around me. I know them to be the ocean-priests of Ura, wo communicate with me through dream, who were showing me events someplace by guiding me through. I was riding inside the mind of a child nearing his teens, experiencing these thoughts about cultural shift from his perspective. My relation to this child; perhaps some future self, a descendant, i don't truly know.

I wrote as much about the dream as I could in my dream journal. The people were ascending to the concrete platform, when guided to by the wave of the Affected who were basically the order-ensurers. I do not recall if they had any specific weapons, they didn't need to, it was all psy. It felt like a cattle market, a butchers, slaughterhouse - thats exactly what it was, the slaughterhouse. The selected stood in a circle and the choosing games went around. There were strategies within this, it was like a game of mah jong, where the people in the circle were the playing pieces, different strategies were employed by those trading us, gambling on us. The soundscape was electrifyingingly terrifying. Some sort of futuretech music, hard and aggressive in its mechanicalness, so much more mechainized, each sound toned perfectly to affect and pin the people who heard it, into its grid, a specific thoughtstream, focussed clearly as if on a clarity-drug, inhaling constantly without exhaling, flowing forward with the deeper rhythms affecting our chakras, lower down ,tones to override chakras and grip onto them, to imprint a patten into them, into a persons lightbody, so they resonate with intense density according to the focus. The focus overrides psyche.

The guardians were showing me this, i was experiencing the fear of it, using calm and detachment knowing we would return to the other places, that this was for us not an immediate reality but for others...
the spaceships look the same as the ones in the movie Circle. Those of us chosen to be beamed, those in the circle - it is pretty much what the dream was about, the movie tells all the rest of the information of what was happening there.

Then they made a movie based on a dream I had, so elaborate and identical that it proves a lot of what is being talked about. Other creative thinkers are visualizing the same experiences. It got as far as they made a film about this one. It is real. The experiences awaiting for humanity as we psychically expand outward toward the oort cloud and beyond, involve stuff like what is happening in this dream.
Experience it as a test of purity of human soul, heart and will. 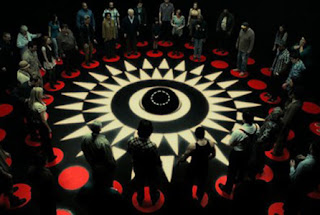