My own sexuality fluctuates between absolutist heterosexual and bi-curious.

I was raised to be gay by a lesbian mother and I rebelled because my own true male nature.

As I get older and more confident in myself and in revealing my feelings on the topic to the general public, basically as I give less of a shit whatever anyone thinks of me and trust the universe to get to know me instead of projecting bullshit onto me, it becomes easier to face up to the fact that we are naturally a promiscuous and bisexual species which has been screwed up by generations of social indoctrination with the intent of controlling and exploiting your sacred sexual-spiritual energy.

I have had exclusively female partners with the exception of losing my virginity by being gay raped as a young teenager. This has had consequence of screwing me up about it quite a lot. It was 8 years before I told anybody what had happened and it has been more than a quarter of a century since it happened. 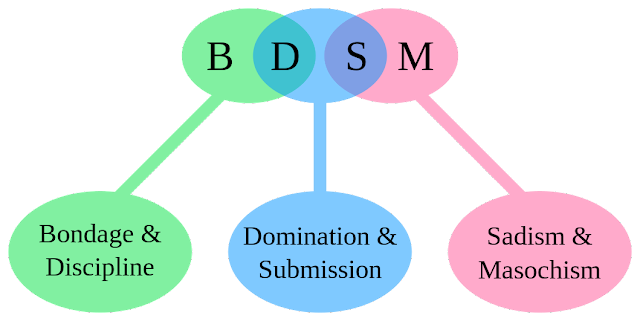 The big question which nobody discusses and it needs to be, is this:

What exactly is meant by bondage?

To most people the word envisions latex and handcuffs, whips and perhaps blindfolds. Increasingly, gaffa-tape, rope and ball-gags.

The word has one simple meaning which is not what is pictured above.

It means sharing experiences, putting your trust-partner through experiences, designed to make you both more intimate with each other, by stepping outside of normality (your own and society in general) and into an energetic space where the two become bound to one another, not merely physically but more especially emotionally and mentally. Naturally this incurs all manner of behavior which would be regarded as outright abusive were you to walk up and do it to a stranger in the street. Otherwise please let me know your postal address. In easy terms, this involves the importance of kink. It need only be light-hearted.

Bondage games are those which are designed to make couples more intimately bound. It is bondage to one another, so that neither strays or at least so that they both always return to one another whether they stray or not. It must be done In Perfect Love And Perfect Trust.

Heightened pain, heightened pleasure were methods for achieving this. I had studied the concept from books of ritual and theoretical magick. Bondage was the need for sharing a complimentary (female to my male) nervous system which the owner trusted me enough to reprogram, so that we could balance one another and achieve heightened perceptions together. The result - there is a reason why the word magick is used to describe what is attainable when people do this. We functioned from the center, the heart, and on expanding that. We were trained by Thanateros and the Order of the Morning Star although we mutated the teachings to serve our unique explorations. What we achieved by doing so went much, much further than the scope which the secret schools were even aware.

Envious third parties destroyed us because we did not protect our relationship enough to reject those only ones who could control us sufficiently to drive a wedge through us - parents. We were both in bondage to our parents who owned us and they twisted and manipulated us until we tore apart. Our bond was not perfect because our Trust was not perfect - because by circumstance we were forced to trust third parties who should have been safe however turned out to be untrustworthy. It has taken fifteen years to heal that wound.

Currently my main focus is on educating the world that the reason why men and women both have two nipples is expressly for the reason that we are designed to be balanced energetically by having both nipples suckled on at the same time on a regular basis - which requires two other people willing to become involved in such affection.