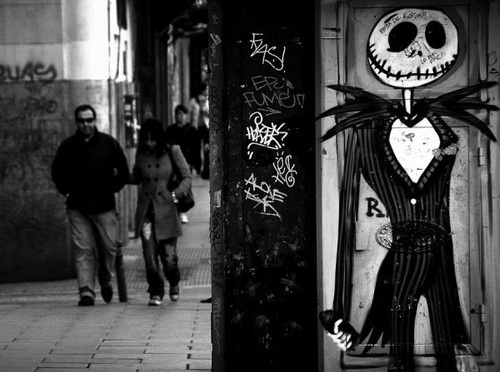 “My set is amazing, it even smells like the street”
Halloween Jack aka David Bowie, Diamond Dogs album.


Before Necromunda (deathworld) there was Confrontation, published in five episodes in White Dwarf magazines by Games Wokshop before I reached puberty. I read it and re-read it and pretty soon realized that the rules they presented were both incomplete and contradictory, even with the original and much superior hardback Warhammer 40K rulebook to draw from. It was intended as a pen&paper, 'imagination based roleplay' / 'tabletop battle game with miniatures' crossover.

It depicts a circus of all that was deemed cool by war obsessed squaddies trying to influence male pre-teenage visionaries raised on Bowie and sci-fi noir. Confrontation is Escape from LA meets eighties glam rock chicks and pop culture fashion. It is Mad Max without vehicles. It is Trash City meets Nitro-99. Bladerunner meets Total Recall on the backroom tabletops of Mos Eisley bars. 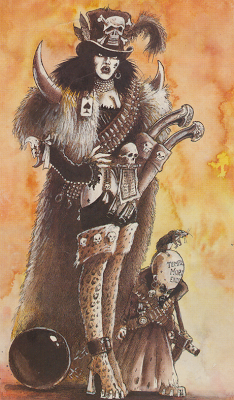 I gave up on GW for being too expensive, for letting me down with the nonsensical Confrontation rules after the promise of industrial urban distopia street-gang skirmish warfare, and for reinventing Confrontation into the stupid games system of Necromunda which had less psychers, less mutants, less personalized characters, less intrigue and strategy, less politics, less customization, and more cartoon blueprint-imprint brainwash programming, because every group who ran the pre-generated adventurers with pre-generated gangs had the same pre-generated programming, and it sucked. 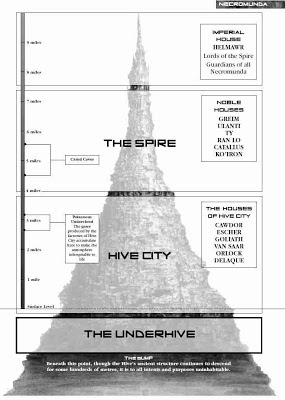 But I still even today collect bits for my bits box, to superglue together into Confrontation/Necromunda dream sets. As an art student my bedsit became The City as I built a Spire out of recycled crap that people would collect and bring me knowing vaguely that I was working on some crazy art project.

During my twenties I filled a room of my flat with trash, it took over long before I could silver-spray-paint most it. When I left Zooport I filled the attic with my completed City section models and 3D wall-relief backdrops to give the new denizens a shock when they went up there by torch light.

Now I am older and more grown up, I have only a few bits-boxes of pieces too cool to part with, and outline visions of sets I will probably never build. I have giant posters hand drawn to illustrate in 2D what it is I have lifelong been trying to create in 3D; the perfect Confrontation/Necromunda street set. 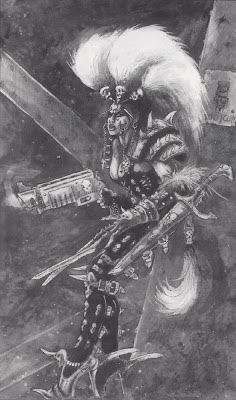 I can find surprisingly little about the original Confrontation online.

Confrontation wasn’t just a broken rules system and some great visionary descriptions; it was the disturbing illustrations that set it apart and made a reality of it. I knew this place, I have lived there. The illustrators accused of having had too much acid, had broken through to give pure insight so we young kidlings could follow through the portal. It was the fashions, the locations. I didn’t like the guns so much, the army mentality of aggression and violence had less impact than the sex appeal of the cybergothic sluts portrayed in mutated chaos and over-confidence. 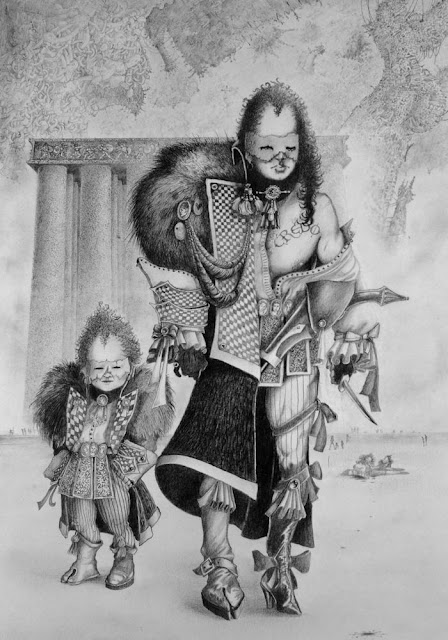 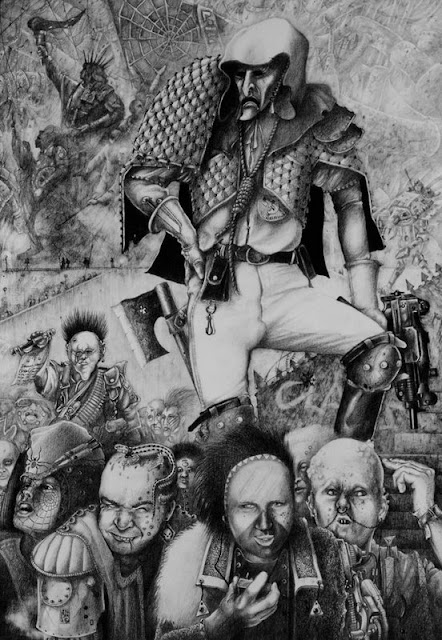 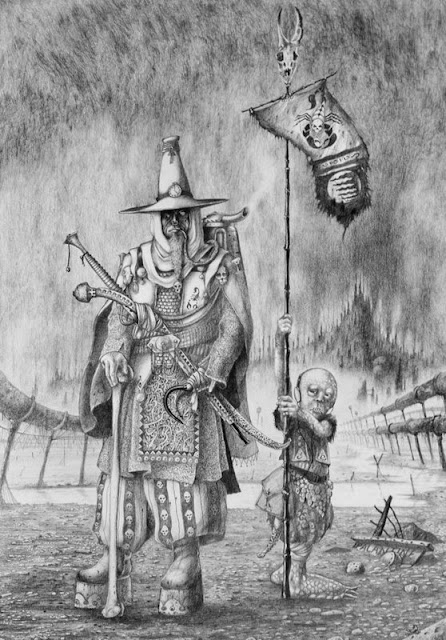 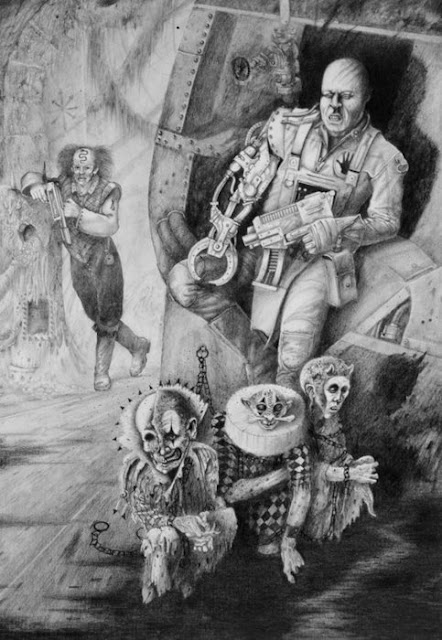 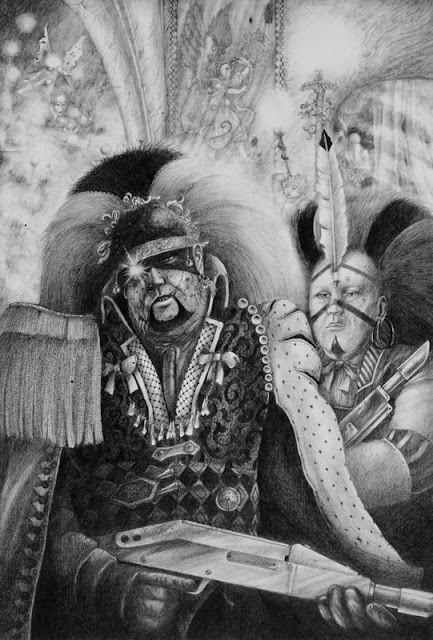 Then SLA came along from a Scottish roleplay game company Nightfall, which somewhat filled the gap; eighties technology on the world of Mort where monsters are weeping up from polluted wasteland cracks between consumer apartment city sections supposedly protected by mesh fences and patrolled by media hero warriors who come crashing through your apartment wall just moments after you recognize your street as the warzone on one of the omnipresent live-news-entertainment tv channels.

SLA had pretty much the same soundtrack except by then it had a techno edge instead of early metal. that the GW staff uniformly got into. SLA was also from Diamond Dogs. And its artwork is legend, right up until the time its copyright owner Nightfall sued one of their fans for posting some of it on the internet without prior formal written consent. 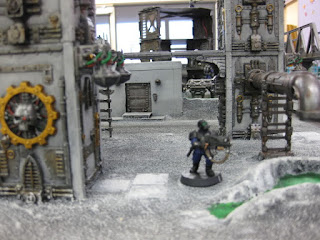 I realized in school, that all the sets and the art that went with it, all the war games, the scent that accompanied it all; of cleanliness, fresh plastic from the moulds from Games Workshop, the cellophane, held a tone that opened the mind, to remembering, to coming to terms. Something in the military training facility water that stripped the mind clean and into pure focus, not to question orders, reflex shoot to kill.

I realized that the kids in with my group were the soldiers I had fought alongside and against during the perpetual war; in 'nam, in the trenches, world war one and two, too many to list and name. 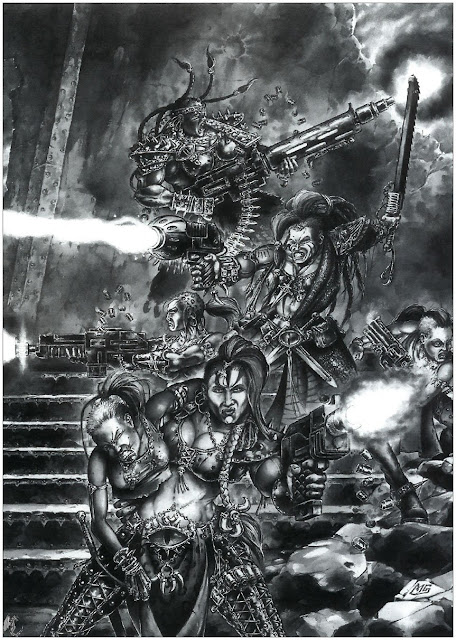 All the dead soldiers reborn and coming to terms with the horrors of the warzones that broke us through to psychic perception, awok us from our slumbers, heightened senses of the blood and fear, pain and gunpowder, explosions and mud, bullets and lightning reflexes, imminent death and confidence of being bulletproof, because of seeing the timing, seeing the framework, breaking through the matrix of the scenario we were stuck in; recreating, re-living the experiences through tabletop war games, skirmish battles, before GW went cartoony and put their prices up, a rubber mask orc after the hallowed gaunt of a nazi uniform inspired battle craze.

This was to help us heal, all of us to calm down after we were killed just a few decades or so before. That is the purpose of tabletop wargames for boys. 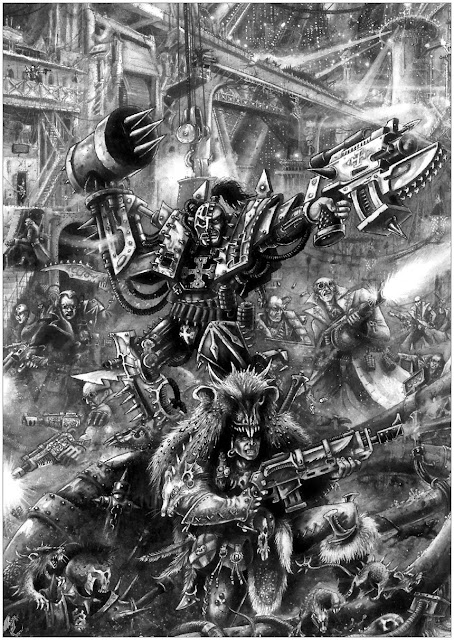 Just a few months ago I met a friendly heavyweight boxer in the street. He took a shine to me and we got chatting. He’d not long returned from  the front for mental health reasons after fighting the Taliban. “Ten year olds; that’s who we’re fighting. Kid pointed a gun…” choked throat “What you going to do?” He gesticulated the act of lowering his rifle. “My mate, bang splat. I couldn’t do it, I got kids of my own.”

I tried to get him a job with a security firm I know so he could do bouncer work instead of the ring. Last time I saw him he was having trouble coping with civilian life and had signed up to go back out there.


“Its only a matter of time before I kill someone and if I’m going to kill people I might as well do it properly.” 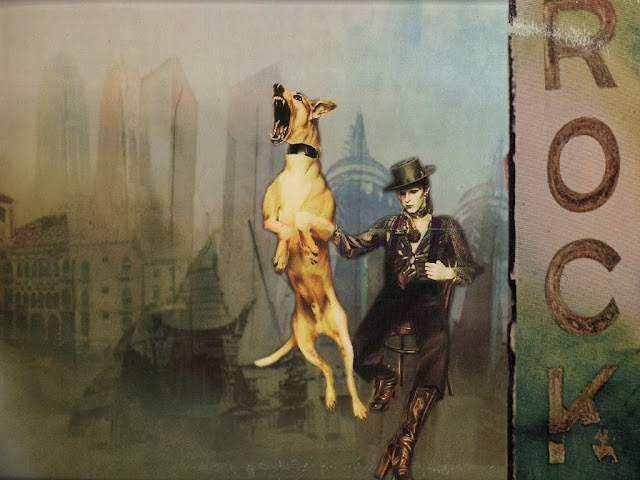