I write from the perception of a counsellor concerned with the impact social engineering employed to divide-and-control which creates an imbalance in society, resulting in the destruction of community, to provide leverage for further exploitation of individuals. If you are an individual this is directly relevant to you.

fourth wave feminism is a rejection of fem-dom and a focus on female related issues.

fifth wave is use of technological communication to manipulate society on a 1-1 and small group basis. This is precisely how cults work. It offers the manipulator a chance to interfere and retreat with no responsibility. It is an ideal situation for Narcissists to enjoy their methods for empowerment-by-control-and-destruction.

Popular within the contemporary communications technology community is the dynamic between Narcissist and Empath. A cultural terminology has emerged expressing our life situations in these terms and it is a method of indoctrination for the purpose of agenda based manipulation. This does not mean there are not cases where it is relevant and useful. It has also unveiled the scope by which manipulation is occurring throughout society to reprogram people to become less empathic and more narcissistic in their behaviour toward each other. Most especially this is aimed at encouraging females to resent males, playing on the foundation of gender based division.

Personally I believe that genders are complimentary, and phrases such as “battle of the sexes” encourage sexism and division. Communities thrive best where there is harmony, not division. The complimentary gender is 50% of the people on this planet. That is unlikely to change simply because of a personal prejudice and encouragement from hardline extremists using com-tech to brainwash a generation.

#GenderlessEquality is not the same thing at all as trans-gender.

Stonewalling somebody without explaining to them why they are being stonewalled is a method used by narcissists to protect themselves against those who they perceive as narcissists. The result is the target (the one being stonewalled) does not know why the stonewaller is doing it, and assumes them either to be acting irrationally or to be manipulated into acting on misinformation as an attempt to socially isolate the target as a part of a victimisation campaign (Hate Crime by proxy).

Whatever affront the target did to the person doing the stonewalling, is going to be repeated endlessly until somebody points it out to them that a specific aspect of their behaviour was wrong. NB it is not the person, it is the behaviour - these are two distinct and different entities as is taught in childcare. All of us have a social duty and a duty to self to continually improve our behaviour with relation to other people. It helps vastly more when we are aware what behaviour is perceived as wrong, than it does when the target does not know at all.

A person who has been stonewalled with no concept of why, is going to be confused, offended and will not be able to work on improving themselves or recognizing where they might need to improve - if at all.

Anybody encouraging stonewalling with no explanation is actively divide-and-control, is attempting to control the one doing the stonewalling. An intelligent person (A) would question why person B is encouraging them to avoid person C and to put both person A and C into this position.

If you Stonewall somebody for no apparent reason - you are the sociopath.

Stonewalling somebody after explaining why they are being stonewalled is a method used by empaths concerned with improving the social conditions we all experience. It establishes a dynamic by which healing can develop and progress can be made within the community. The target can work on the problem because the target knows what the problem is. It also exposes where stonewalling is a reaction to misperception or as result of manipulation of the stonewaller by a third party.

To stonewall somebody for a perceived sleight without explaining the problem or for no serious reason at all is the methodology of a narcissist who has decided to drop one of their sources of energy (“supply”). There is only one reason a narcissist would do this; self protection, to avoid exposure. Discredition of the threat is a standard reaction. "I had to stonewall him/her poor me!" solicits sympathy by way of securing new supply.

A full exploration of how humans use each other as sources of energy can be found in The Games People Play by Dr Eric Berne. Make it the next book you read. It is easy to understand the principles and strategies which develop for purpose of energy supply. It is as relevant today as ever, although the use of modern communications technologies has given us a different arena and the emergence of different strategies (see fifth-wave feminism).

My Experience of StoneWall

I have both stonewalled people and been stonewalled by them. The Block function on facebook is stonewalling. It is useful to avoid any unwanted attention from abusers. People who I have been stonewalled by, who later explained their justification for doing so fall into three categories:

- genuinely had a good reason (fortunately I have had very few of these if any)
- was/is playing control games which I have challenged/exposed, so has stonewalled me as attempt to cover it up (including labelling me as an abuser to justify their own abusive actions)
- was manipulated by a third party who sought to disable their support network of which I was included by persuading them I was a threat.


When you weigh up these three reasons, these are the questions you need to ask when stonewalling a person. Why am I stonewalling this person? And; Is the right thing to do for myself, the target and society at large, to explain to the person why they are being stonewalled?

A genuine healer heals the whole, holistically, rather than isolating components. You only cut out a cancer if it is definitely identified as a cancer and not a support. Most people are in real life situations which involve elements of both - we are beyond Disney Princess Syndrome which is a meme used for leverage. This is symptomatic of the society we live in as much as it is symptomatic of the cPTSD so many of us have as a result of trauma from the society we live in.

The Positivist Agenda is to create no more trauma and to heal that we have suffered, for the benefit of individual and community. Society is your enemy, Community is your friend. Community is holistic and non-exclusive. When it becomes so, it is no longer community, it is a sub-culture of Society. This is the only rational Humanistic approach we can take toward healing ourselves and others without harbouring fear and hatred toward specific individuals. We all know that fear and hatred are toxic.

Q. Who gains from fear and hatred?
A. Those who exploit others for personal gain. 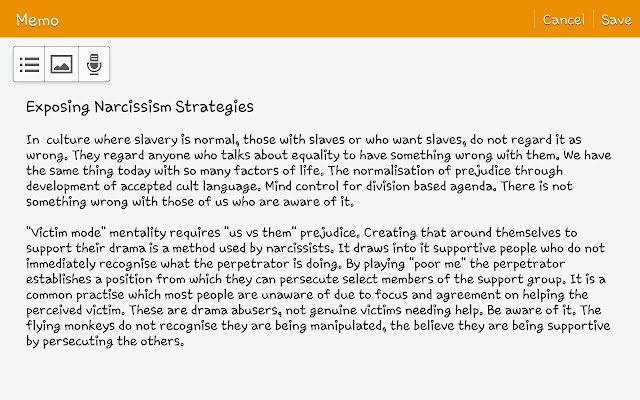