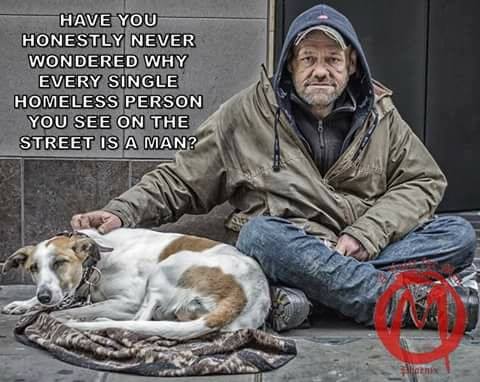 "What's your opinion on this picture?"

I have known a lot of homeless people. No two were homeless for the same reasons. Most were voluntarily living on the streets for various, albeit slightly insane reasons, but nevertheless understandable given the circumstances. One was female. All the others male. She wasn't the most difficult to reach out to. She told me her story, accepted small change but refused point blank to trust me at all when I offered her my facilities, bath, cooker, somewhere dry to crash. Probably because my gender. Most homeless people are like that though. Once you have a protective layer of grime on you, it actually insulates you so having a bath is regressive if you are dedicated to living on the streets. Some of the guys would crash at my place sometimes but mostly they preferred the streets. Some of them got houses eventually. One guy was given a council house then told he could not have his dog there. When you are on the streets your dog is more than a pet, its a brother, your eyes and ears, your guardian. He returned the house keys and went back to the streets. Eventually the city council and police decided to clean up the city. Nobody knows exactly what happened but overnight all the homeless disappeared. One guy who was tipped off that it was coming went to a different city, I saw him again because he still had business in the city I lived in.

I was in this situation because I was working as a professionally qualified outreach worker and had recognized that homeless people have absolutely no trust at all in system workers so they will not go to see a counselor who works for the system. There is so much red tape in system work that its useless anyway to be absolutely honest. Its now fifteen years later and in that time i have a lot more experience of the system, all over it and I can say this for definite: I have zero trust for system workers either. In one word, corruption. In two words, Prejudice. If they are doing it for money, they are in it for themselves. I quit being an outreach worker when the police and council set me up to shut me up because I was helping people. After that I lived rough myself for a while because the system had screwed me over, I lost my council flat because of corrupt bureaucracy. I built a den in a forest instead of the streets though. Homeless people are not by default stupid people. Mentally ill usually, generally as a result of abuse, and all of them have a story about bouncing off the system which had screwed them up in the first place. A few of them trusted me and I believe I helped in a few cases. I also watched people freeze to death because they were so damaged they refused to trust anyone. Regarding why the post shows that homeless people are always usually men - there is women's refuge but not men's refuge. It is for the same reason that women are given a lighter sentence for the same crime than is a man. The system is a cunt.
Additional:

I bathed and saw that I need to put that into context. I got into doing all that after a life changing trip to Egypt where I saw real poverty of a type rare in Britain which has stronger economy and a welfare state. On returning to a place with clouds I could not believe that we have water in the skies here. Luxury to such extent! Water is sacred it is Life. People who do not respect this are spiritually dead. I wanted to make a difference for good. So I trained and went into the city underdark and did very little but compared with the zombie wage slaves, only the homeless had any humanity because they knew that water is sacred. After I returned from the forest I met a girl who, long story short, got me out of the city, onto streets of a distant town and living in vans paid for by rebates from suing the DWP. Then we split and I met another girl who I have a kid with. Life has showed me diversity of which street life is only a part. People who never experience it have no empathy or understanding of hardship to put a defined perspective on Life.

Is not just me who thinks so.
The following are from another facebook discussion about the same photo.

"I've never seen a homeless woman who wasn't either a drug addict or mentally ill. And rarely even then."


"They get sheltered and simps will go broke taking care of them skeezers."

"A woman can always find some man to take care of her. She can make all the shitty life choices in the world but if she fucks up, some rich cuck somewhere, if she's cute enough will support her"


"I'd say from about every 10 homeless people I see 2 of them are women. They definitely get to be not homeless sooner than the guys, I have observed."

"Because the law is more than likely to take a woman's side and that is the hard facts most naive men get themselves into. Time to educate young men before the good life they have is in pieces"

"Women are responsible for forcing most of them onto the streets.People see them with alcohol and assume that's the cause,it is the painkiller."
"Women's shelters..Aid for dependant children..food stamps..welfare..disability laws..family support division all make sure women have a income and place to stay along with Section 8 housing laws.

"The cause of most men being homeless:"

"No. Men have always been shit. I love to have chat with those blokes.
"I did chat with many homeless dudes in Toronto; 9 out of 10 were decent human beings wronged by system."
"Depending on the state, human/social services are either bad to virtually useless. You're better off if you're female if you're homeless. You just can't walk into a homeless shelter. They screen like hell, many are only temporary, and some even charge people. They'll front like they help people but a lot of them don't do shit. Unless it's a impending disaster or severe weather, they don't have open doors and they'll only help in this instance because of the law. They'll even bullshit then too. To make matters worse, a lot of cities are shutting them down."

"Exactly. Let’s rewind 30yrs prior in their life. The system fucked them, but you’ll never hear the real story on the news or other media tv. It’s hush, hush.... They may turn to alcohol or drugs as a coping mechanism. When you honestly get fucked by some man-made system that’s in the woman’s favor and there was nothing you could do to change the outcome, that’s a tough pill to swallow."


"We'll know we've reached true gender equality when we see more women dying in wars and living on the streets like men do. That's something we should continue to strive for in this world."