A reasonable argument for promiscuity and open-relationships

(written by someone who seeks preferably a monogamous long-term relationship with someone compatible and capable, but will settle for multiple long-term open-relationships with compatible people who require training toward mature responsibility).

If you believe you have claim over somebody else, that is slavery.

If you are in a relationship with a person who you are owning as a slave rather than respecting the relationship as a luxury, you are the problem because we do not endorse Slavery with such certainty, it is even illegal.

If your stability relies on being somebodies slave master or mistress, then you are the slave, not them. It is possible you are both enslaved to one another in which case the other person going off with a third party is a sign that they are not as enslaved to you as you are to them.

When you are able to maintain independence and stability without the person, you are worthy of the luxury of being in a relationship with them.

If you are not a slave, but still rely on them for stability, it means you are a child. The other person is making adult decisions about their own life which does not involve the demands of a child. Adults need to do that, and are able to do it.

A child would use emotional blackmail technique attempting to force someone into slavery. Adults do not do that. By their actions a persons mental age can be identified. If a person has the mental age and emotional range of a child, that person is a child.

An adult having sex with a child is pedophilia.

Sapio-sexuality is a part of sexuality alongside emotional and physical. A person who has sex with an emotional-age and mental-age child, albeit in an adults body, is a pedophile.

Identifying which people are mature enough to behave responsibly is often impossibly difficult in a culture which has very messed up morality regarding sex, where it is believed that a sex partner must be a slave.

Often a period of testing is necessary before jumping into bed with someone, which means our immediate physical needs are met by disposable strangers rather than regular partners with whom we are in relationships, and therefore socially expected to be attempting to parent our partners behaviour toward mature responsibility.

A fundamentalism which is that if a partner has another partner it automatically ends the relationship is religiously followed by people incapable of maintaining adult personalities and attitudes about "sharing is caring”, which is perhaps the very first thing we teach children; it is critical to human being. If you are not actively being human, you are not a human.

Posted by snakeappletree at 08:09 No comments: 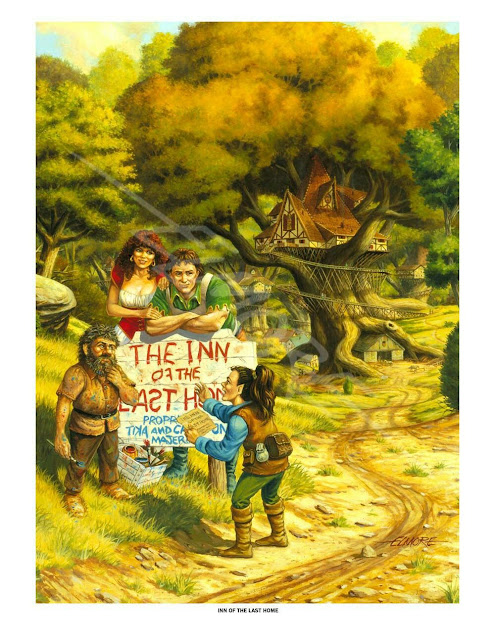 As a teenager I poured through my friends copy of Leaves from the Inn of the Last Home after he introduced me to the first two trilogies of the Dragonlance Saga.

*see also Winter Knights, the second book of the Quint trilogy by Paul Stewart and Chris Riddell, part of the Edge Chronicles which are entirely unassociated with the Dragonlance universe.

I was searching.
I was searching for something specific.
And to my great satisfaction, the authors of Leaves had done me proud.
I discovered the closest thing possible to an official recipe for Otiks Spicy Fried Potatoes.

I added more oil, they go slushy and oily.

I decided I do not have the natural flare for making Otiks Spicy Fried Potatoes and with much remorse I quit attempting to make them for twenty-six arduous, hungry years.

In the meantime I discovered Farls, an Irish recipe which is a mix of mashed potatoes with wheat flour, so the dough can be both baked like bread or fried like chips. Genius.

Then one day in my Forty-Second year it all clicked together in my head. Where I had been going wrong in the first place. I returned to the kitchen armed with a sack full of potatoes and spices, to try again. It's not quite Otik's recipe but its a helluva load easier.

You will need:
Boiled Potatoes (washed and chopped without peeling - their skin is where the enzymes are)
Butter (approx 1/6th the amount butter to potatoes - we want this creamy)
Turmeric (yellow powder)
Chili powder (red powder)
Ground Black Pepper (grey powder not dissimilar to gunpowder)
Salt (white powder or in this case pink Himalayan mountain salt)

Method:
Boil the potatoes until soft, drain, add all the ingredients to a bowl, ensure the chili and turmeric each thinly cover the surface - thats how you know you've added enough, less with the salt and pepper, mash it all up with a fork until its fluffy. Serves only 1 regardless how much of the stuff you make.

Posted by snakeappletree at 09:11 No comments: