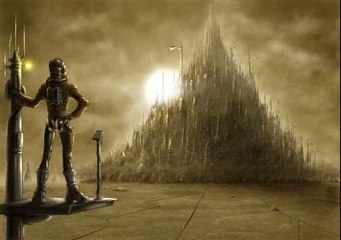 A childs school desk, upturned.
On top of this is a plastic set of stackable modular drawers without the drawers, glued with hot-glue.
On top of this is a frail wooden two-tier shelf from the old days, crudely repaired.
It's six feet tall and measures 2'x2' at the base.
Most of the interior is hollow and therefore cardboard tubes fit nicely inside it vertically, along with some of the modular bits I built previously by hot-gluing random boxes together to create tall buildings with ledges and sticking vacu-formed plastic wrappers to their sides. So far it's looking alright despite needing a paint job to tie it all together.
Posted by snakeappletree at 02:25 No comments:

SynthWave & RetroWave music movement exploded during the 2010s
wherein the colours of neon blue-pink-purple
became the thang
which previously was identified to
Slaanesh, the GW chaos god/dess of sublime sensual sexuality and hedonistic excess
as razor-needle-pointed out to me by
Rayche Rees
my own excessive slut-tastic playfriend of memory,
sadly disappeared into the goth-punk-noir darkness of Europe,

"to avoid the twisting of Britain becoming a worse shit-hole than ever it were."
Hence the inspiralation to emulate her flamboyant writing style.
Goti sate those wanton senses someway.

DriftingNobody has this to say on the subject of Slaanesh:

"Remember that Slaanesh isn't all about sex. Slaanesh is excess and debauchery. Once a Slaaneshi party gets rolling it's quite a horrendous sight. There is sex but there is also cannibalism, food, drink, drugs, euphoric smells, and heart-stopping displays of dance. Maybe have people go missing from the streets regularly before the local nobles/rich merchants throw one of their weekly parties? That would allow for some investigation work and gives them an idea on which cult they're going to be going up against. A word of caution though, Slaaneshi cults are the most difficult for normal humans to deal with due to the very nature of Slaanesh. The sweet scented air will hypnotise you, the food will tempt you to eat it as if you hadn't eaten for weeks, the wine will draw you in like the nectar of gods, and the crowd is one impulse away from tearing each other apart."

And so it is with awakening coming as a misty morning mountain dew freshness I pick up from where she left off. Thus the Cyberpunk 2020 vision of a new world becomes more ever after our own obvious thing. We have themes left unattended to fend for themselves and grow wild in our inconspicious absence.

Raz was into stuff; the nasty edge of cyberpunk. We did SLA industries homebrew version, blending cthulhu-xeno-tyranid*-tentacle-porn with Kult-esque cenobyte abandon.

We did AI-nano-machine infiltration and biological conversion to serve the machine, brought back from Gotham's Arkham Assylum drug-dream trips to seed the normal world with oil-slick sentient moonbow-shadows fed by dualism of lustful desire overloaded and perversion unfulfilled.

We did a lot of it and involved anyone around us who would willingly or enticingly lend a limb or orifice to join our roleplay crew, insomnia sessions 'til dawn.


Posted by snakeappletree at 01:10 No comments: