Sometimes, you’ve got to love them.

This transcript is an insight into systematic abuse, narcissism and one method to deal with it (by exposure).

Permission granted to copy-paste and adapt this blog-post only, for your own personal necessity. 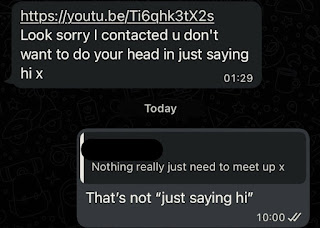 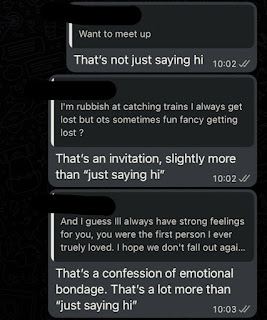 Your behaviour of leading men on only to push him away is typified characteristic of Emotional Manipulation for the purpose of your Self Validation.

You will next play the Poor Me angle and attempt to justify how you are not responsible for your own actions because of your traumatic past experience has resulted in your emotional insecurity.

This stands in stark contrast to the ‘strong, confident, independent, force to be reckoned with’ you initially present yourself as.

I expect you would leverage that to allege I have destroyed your confidence by undermining your egotism and disabling your game face.

You are aware of the affect your behaviour has on other people because you literally apologised for “doing my head in”.

That’s your assumption I responded a particular way to your behaviour.

Possibly you can’t imagine anyone would respond any other way to your behaviour because that is outside your comprehension.

I have pulled you up on all this because I will not put up with being Emotionally Manipulated, ‘strung-along’ or any other narcissistic abuse.

Instead you will next have a go at me for analysing your confusing behaviour and pulling you up on it.

Which I am naturally going to do simply by virtue of having my own mind and which is necessary for any further interactions, in the name of integrity, and for your own CBT.

Would I do that if I had no interest in it at all? You won’t openly recognise this as a valid factor.

Then you will back off entirely for a year before forgetting about this incident or hoping I have forgotten it (which I won’t). Then you will repeat exactly the same thing again. I know this because it is what you always do. That’s our cycle.

How are you going to break it?

I do not enjoy any of that. I am bothering to go through this with you for four good reasons.

1 In part because I have Self Value outside of whatever your opinion. I am establishing a boundary by standing up to your ongoing behaviour toward me.

2 In part because of ‘old times sake’ although that’s growing old now especially as you won’t ever put your money where your mouth is and act on your hollow promises to visit me while in the same breath showing off about how much money you’re wasting.

3 In part because your having metaphorically knocked my door, you will be metaphorically fed the food I choose to give you (Truth) and not whatever food you assumed you’d be getting from my table (‘disposable attention on tap’).

Around here we don’t chew people up and spit them out unless that’s how they’ve previously disrespected us. We do not have time for time-wasters, controlling behaviour and any other general bullshit.

4 There is also, always the possibility you might have knocked my door because you need my help in putting you straight.

That’s what you’re getting a heavy dose of here. That’s a favour to the wider community as much as to you personally.

Consider yourself having Been Told. 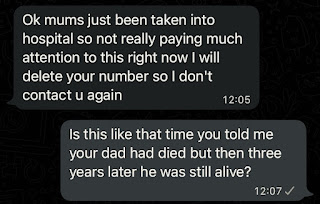 Posted by snakeappletree at 03:10 No comments:

All those people can never get it to work.

I got it to work.

So there I was, an outcast who could do something other people could not do, feeling bad about that. I felt bad about it for years until one day I realised;

“My positivity is more important than their negativity.”

On that day my life changed because my attitude changed. Attitude towards myself changed. My self-talk changed. I recognised it’s irrelevant what other people think or say. They might be right, they might be wrong, but they are not who I should be listening to in either case.

The immediate criticism was that I’d become more selfish. I closed my door to a whole bunch of people and became more of a loner than ever. I decided it was better to be a productive loner hiding in my cave than to be a miserable loner constantly distracted by trying to live up to other peoples dogmatic expectations.

I absorbed the same attitude they were generating, I adapted to survive the social conditions. I’m not here to feed their egos. If anything they’re here to feed mine and if they can’t do that, there’s no point in them existing in my life. This is not the same thing as I had become selfish and egotistical. It was the establishing of a boundary.

I’d finally had enough of suffering, of putting up with other people grinding me down and discouraging me from achieving anything or even believing good about myself. It applies to everybody, people of all walks of life from the beggar in the street who looks down on me because I had more wealth that day, to the teacher in school, the policeman who stop and search me because they were bored, a job interviewer who decided I was not the right person for the job because I questioned employee rights for example no plants or open windows in the office space, no fresh air there.

I was walking the trail of most everybody I encountered was out to put me down for one reason or another and very often for reasons contradictory to those of the last person who had put me down.

After being ground down for so long I recognise that the grindstone simply sharpens the axe.

The purpose of all these external influences was to get me to recognise that. Almost as soon as I recognised that and got all the losers off my back, my own energy levels improved. My own sense of well-being and self-worth improved.

The change was internal, a decision I made within myself about myself. It was a critical judgement but an important one and it undermined the programming I received from the general background culture for years.

I accelerated. My art got better, my music improved, I was more productive than ever. I shifted up through the spheres.

Got into a relationship, we became pregnant I’m now a dad with dad skills, a parent raising the next generation to be more successful than the previous generations.

The main focus of which is: empowering self-belief of the individual to feel not only they deserve to be here and belong on the planet at this time, but thank God they are here because it would be worse if they weren’t.

The individual has the power to turn the tide of the masses on that one to one basis. Otherwise without that individual, the zombie masses are herded over a cliff to their doom. The individual alone can change their own direction only by leaving the masses behind and doing their own thing. And that is how it is supposed to be.

The criticisms which I had put up with for so long which had undermined my sense of self-worth, that looking after myself properly was selfishness and I should be ashamed for doing it, that taking pride of my accomplishments was egotistical and I should actually feel guilty about doing something other people could not do.

I emerged from a fertile cultural compost of vitamin enriched shit which has made me stronger and more powerful, a crushing process has distilled and purified my attitude in the value and worth of the individual, pitted against the misery of a repressive collective. A vastly accepted delusion which is the operating system in the minds of the majority of regurgitative zombies we encounter.

As was proved and widely endorsed throughout the region of Europe during the Nuremberg trials, it is the individuals duty to question authority of others, to avoid inhumane and tragic outcomes.

My message is quite simple. You can recognise it by now for what it is. You do it your way if you want to achieve. If you don’t know what is your way, study by following your intuition instead of bad advice from derogatory and controlling narcissists who outnumber us 10 to 1.

There is however, that rare individual or two who will authentically support you and give you good advice. Analyse, use your intuition, figure out who is the good, who is the bad. Who is the fake and who is a real person.

This is not my story.

This is the conclusion to my story.

This is my life wisdom distilled down into a single, simple message. The important insight to which the purpose of my life. The import, the thing I wish to convey to everybody of all generations is also simultaneously a statement about the civilisation and culture, the social environment of the world I have lived in.

The quest for relevance.

Posted by snakeappletree at 02:47 No comments: