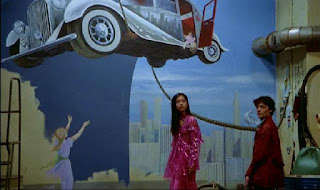 Everybody is aware of the covert operative strategy, “cloak and dagger”, to flamboyantly wave one had around so as to conceal or manipulate with the other hand, unseen. It is a basic conjure rather trick, perhaps the oldest of them all.

When we have the awareness revealed to us that what we thought was happening is not what was happening, we are astonished and do not look any further. It is a sufficiently complicated situation already.

Those who utilise third hand strategy are very well aware of the limited observational scrutiny of almost all people, and the impossibility of exposing the third hand tactics to others who are unaware of that level of game manipulation.

The basic strategy of third hand devices is to use both the flamboyant and concealed hands to conceal the actual intended manoeuvre.

A classic famous example of third hand strategy can be seen in the 1981 movie Diva; regarding the Citroen Traction Avant.

Thanks to KBL who as a master of it has been my observational case study of The Third Hand Strategy for over a decade.